Welcome to the 24th edition of React Native Weekly!

Improvements of the TextInput’s selection Prop

A parser and a primitive were added in C++. The selection prop is applied when component is mounted for iOS.

This is an issue that started at 0.63. When building an android library the package task has a different name, which was not handled correctly in the react.gradle file. The fix uses the existing packageTask variable which is correctly set for applications and libraries.

Héctor Ramos hramos@fb.com wrapped the Shell script with a Node.js program, I guess to make it more user friendly.

Add support for the UIAccessibilityTraitsTabBar

Now you can set AccessibilityRole to 'tabbar’. Change.

Timo Mämecke timomeh@users.noreply.github.com in this commit fixes an issue with tests where some libraries checked if window is undefined to determine if the code is running on a server:

Remove usages of dynamic_casts that are used inside assertions

This is an interesting change because in it we learn that the React Native Core team wants to remove the RTTI flags. As it can also been seen in this other commit: “Remove RTTI from LayoutAnimations”.

This diff is part of a bigger effort to remove the RTTI flags.

To do so they need to remove occurrences of dynamic_cast and other functions that rely on runtime type informations.

In C++, RTTI’s have a bad rep for having bad performance, increasing bundle size to include the type informations, and for indicating a bad architecture.

A fix by Valentin Shergin valentin.shergin@coinbase.com. He explains the adjustsFontSizeToFit was implemented in a way that expected the Yoga to call onMeasure on every text size change, which doesn’t happen.

Since he believe the issue is fixed in Fabric, and the proper fix would be too invasive, he included a workaround to mark the node as dirty to force remeasuring by Yoga.

The TextInput onKeyPress event is not fired when pressing numeric keys on Android.

The latest Android 12 Beta build titled BLUETOOTH_ADVERTISE as a dangerous permissions requiring approval for them.

This diff, adds a new ReactFeatureFlag to enable or disable Fabric appwide.

Compare strings by value instead of reference

This change, while subtle, explains an interesting on going change to a new linker the core team is rolling out.

Summary by Vincent Lee leevince@fb.com: LLD, our new iOS linker, is an ongoing effort to migrate our old outdated ld64 linker. As part of our effort to rollout LLD to all apps, we are making sure LLD reaches parity with ld64.

Due to Identical Code Folding (ICF), LLD and ld64 handles strings differently. LLD treats each string as a separate object in memory even if the values of the strings are the same. ld64 happens to aggregate these values across files. This behavior creates a subtle difference on our codebase when we start comparing by value or by reference.

char * fields from RawPropsKey.h are using == which compares by its address. Here, we cast the buffer to a string to make the comparison, while avoiding the cast if one happens to be null.

Sota Ogo sota@fb.com hooked up the cxx error to the redbox, previously they were only being logged and with Fabric more errors will come from C++.

This is pretty much the same as 51b3529f6c2ca354800c0cf6ecb8eb3115eaa36e but implemented for Android. Now Text exposes the actual base-line offset value that allows Yoga to position it properly when alignItems: baseline is requested. 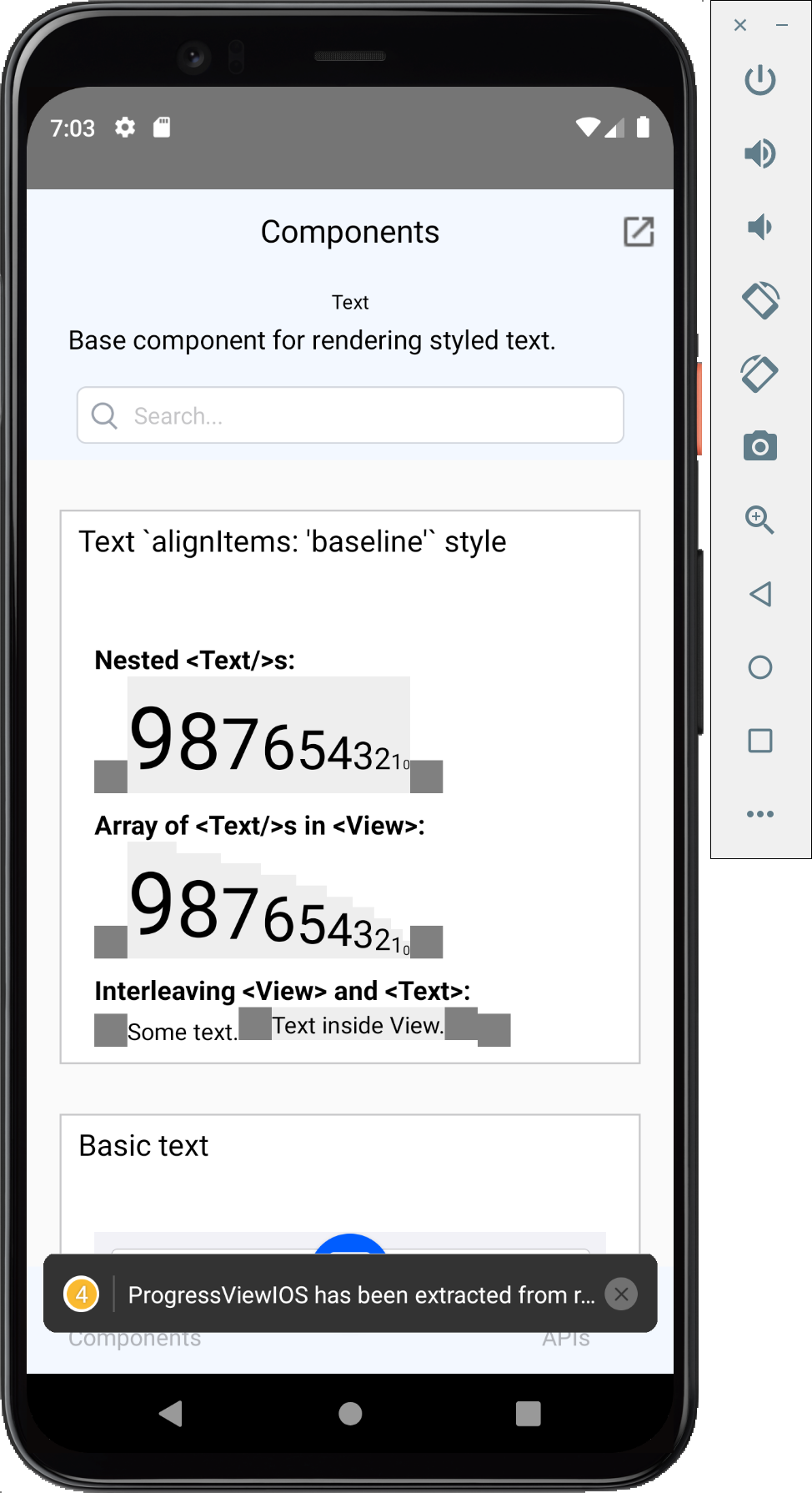 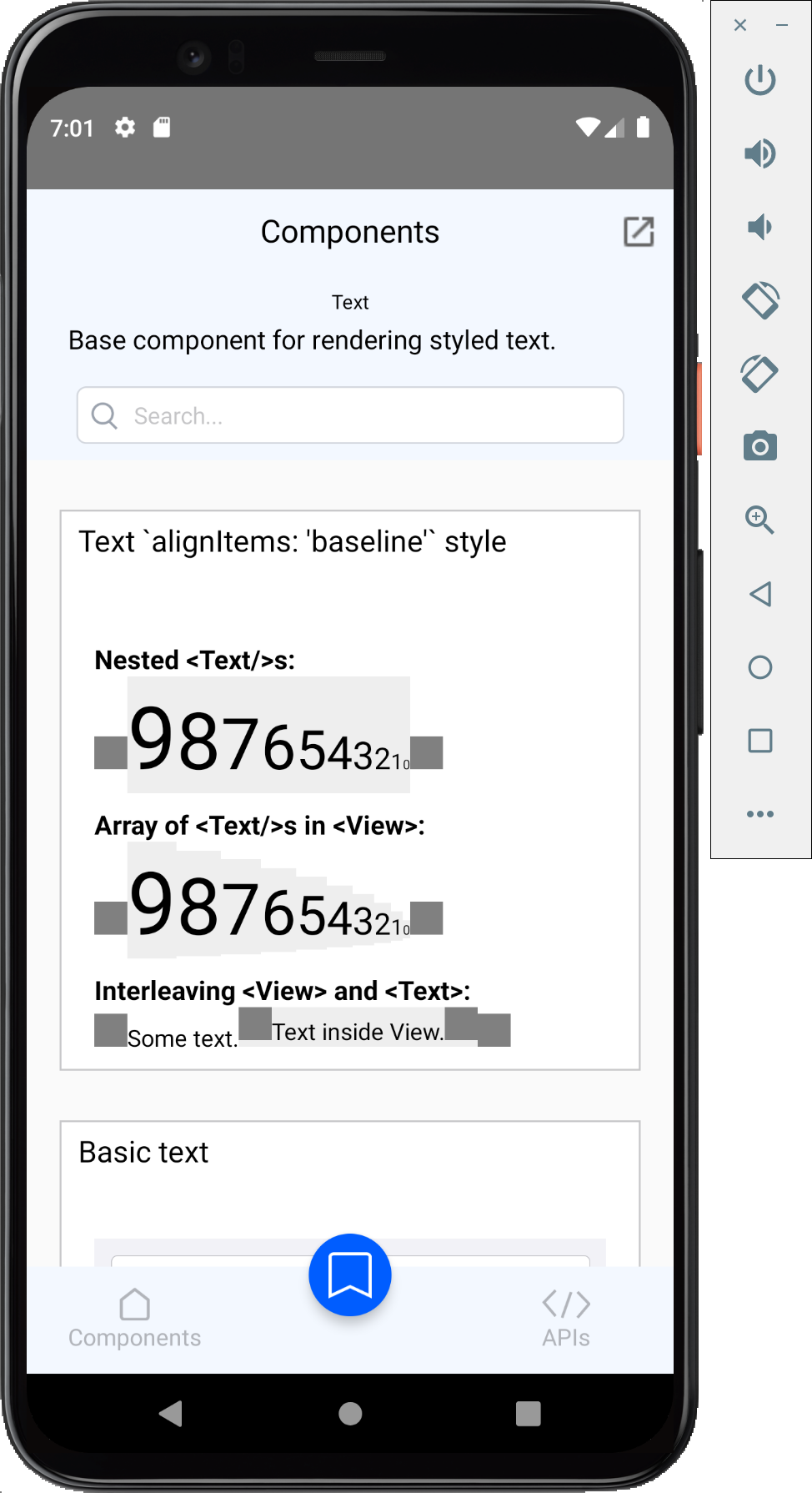 A commit by Adlai Holler adlai@google.com. Certainly interesting to see a Google employee making a contribution to React Native ☺️. Adlai is someone who has contributed to Flutter as well. 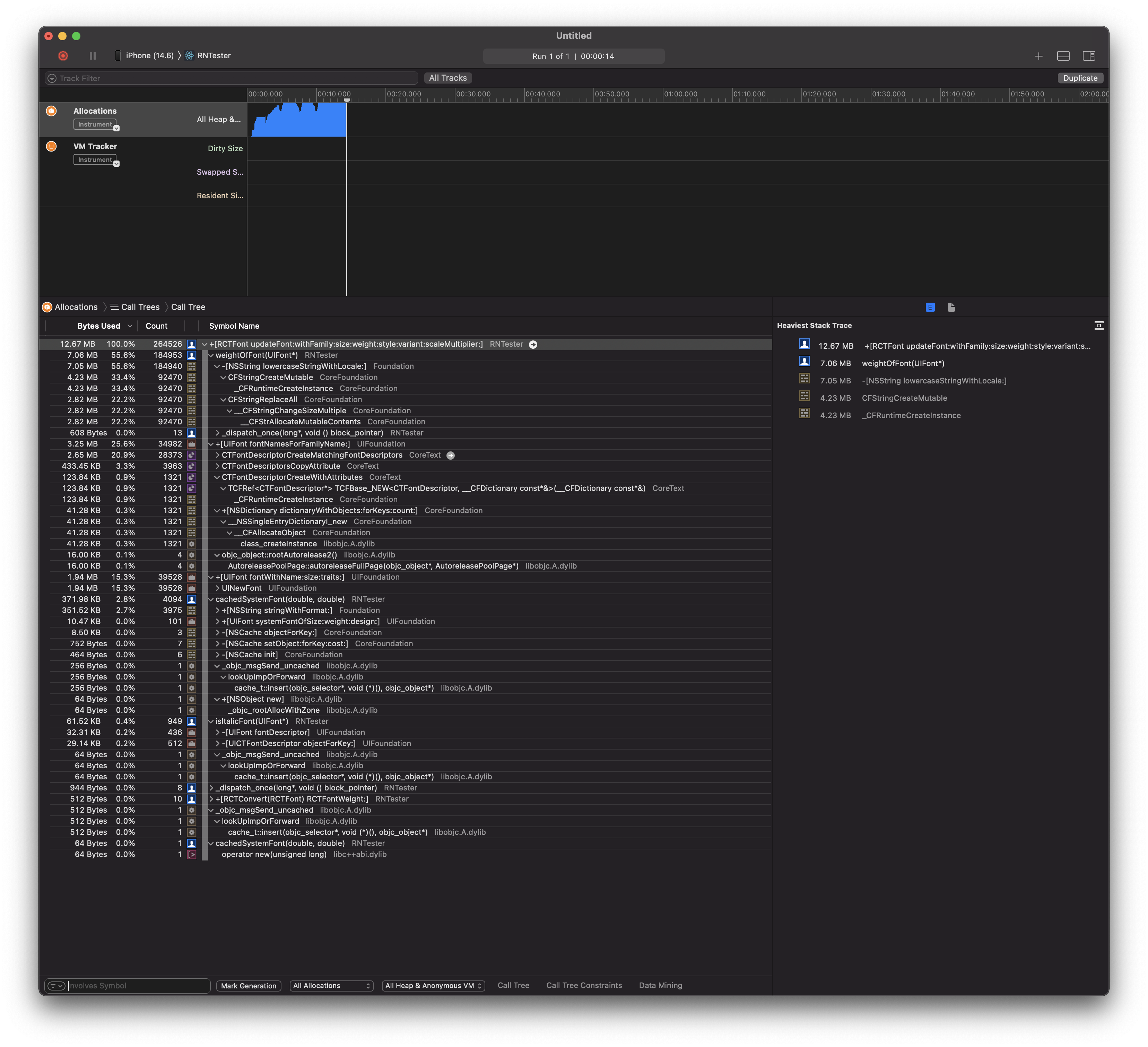 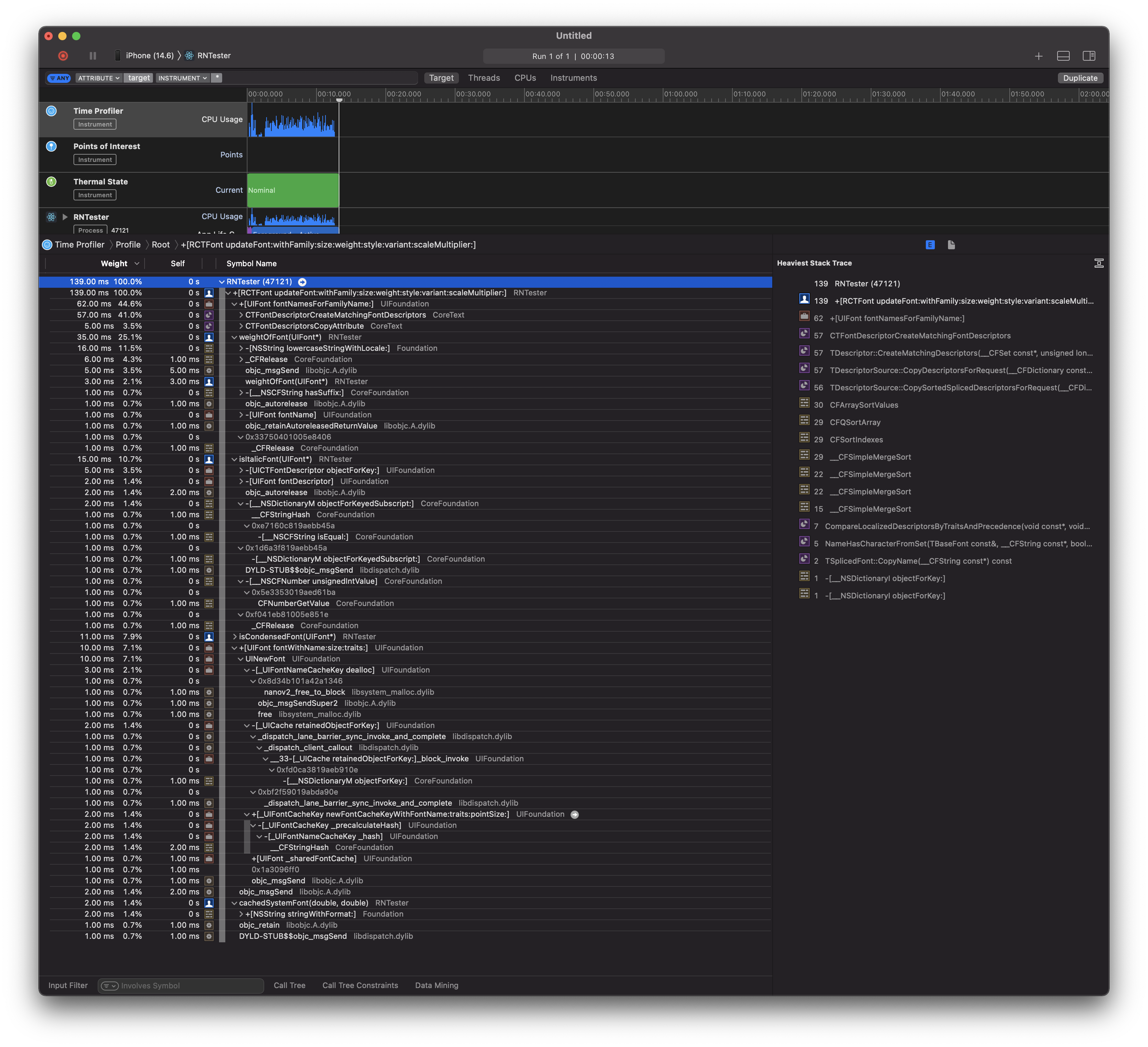 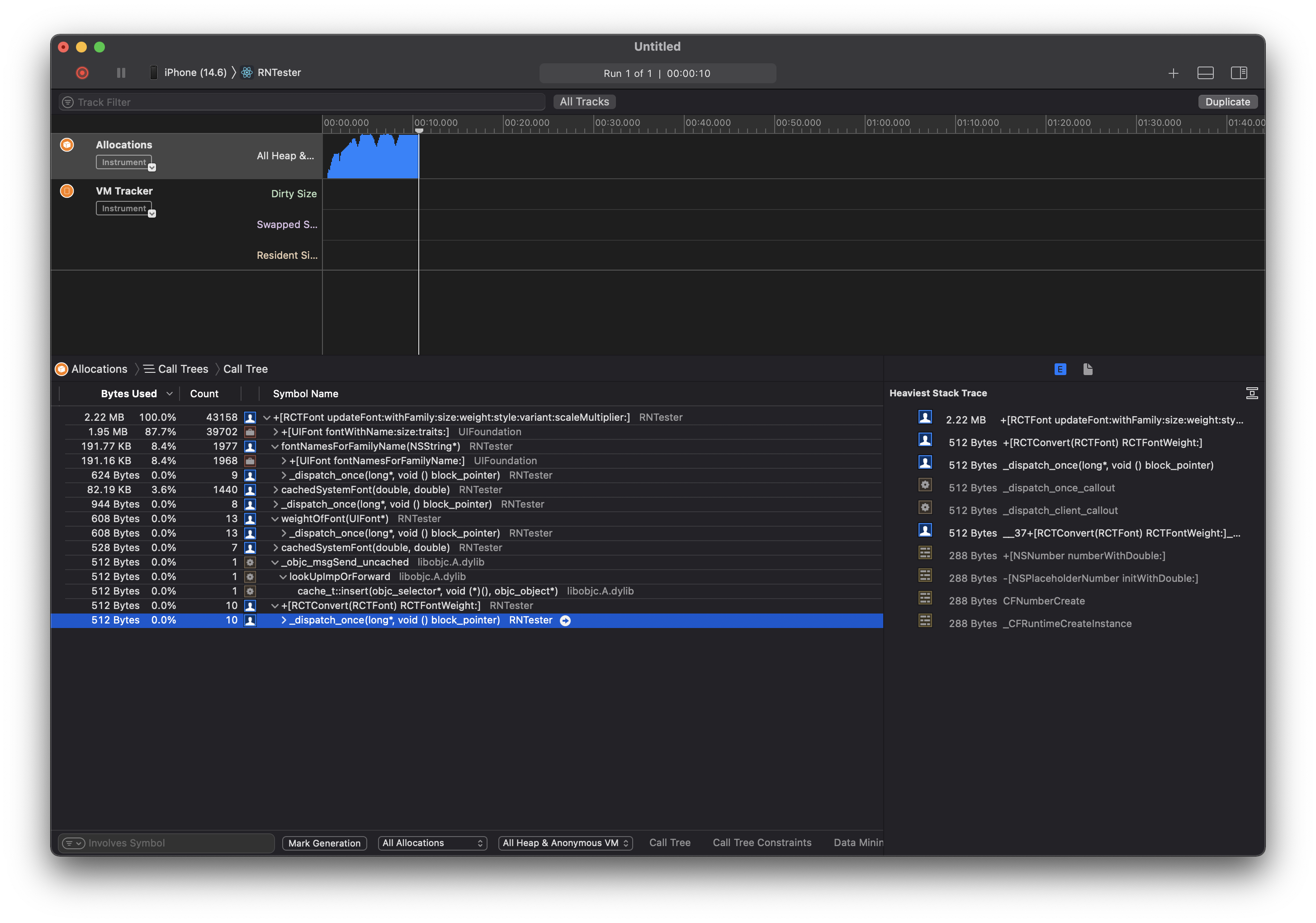 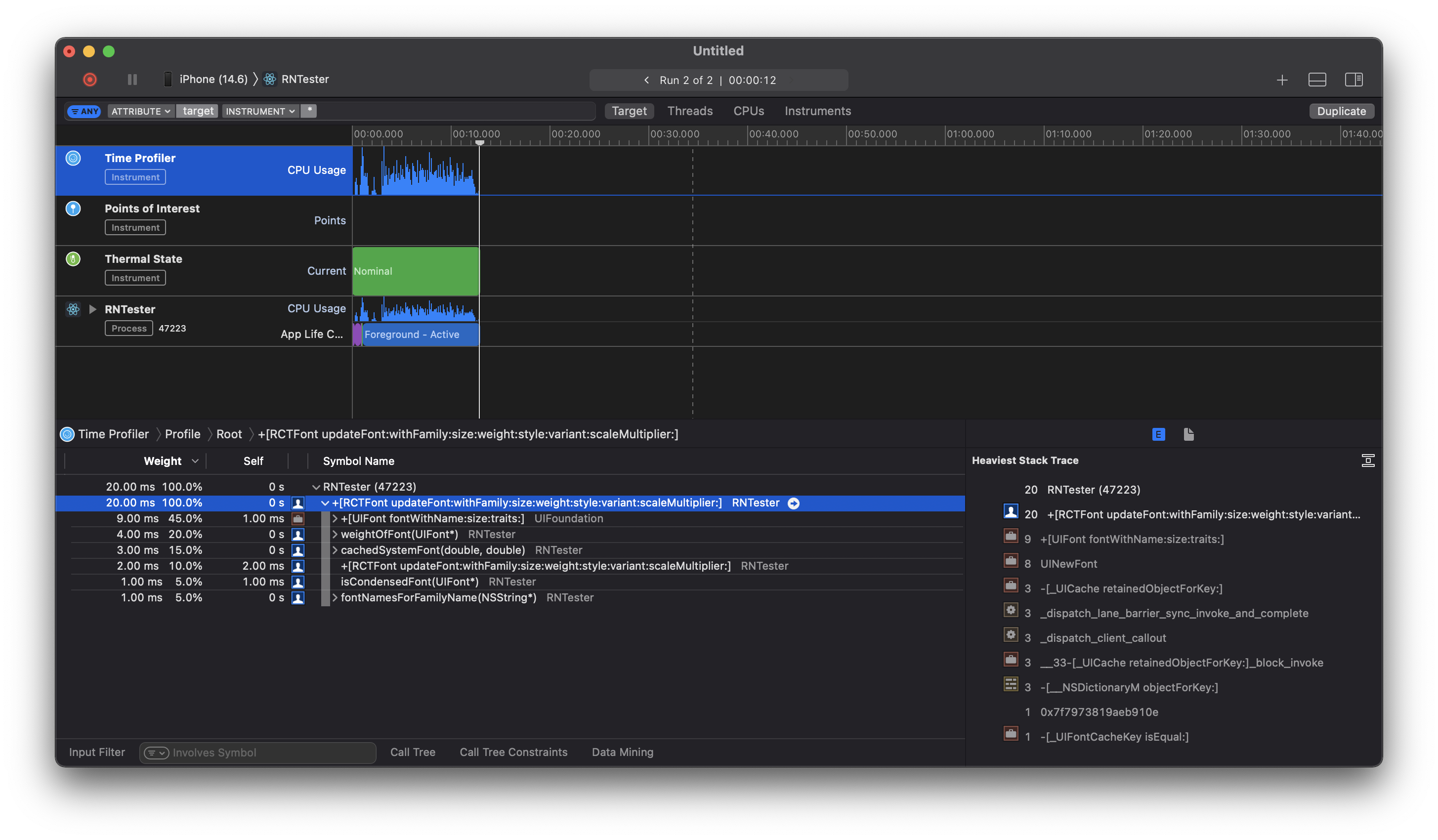 There were multiple PRs that continues to implement feature parity between the legacy modules and the new Fabric modules, examples were:

In this blogpost by the Core Team they highlighted their work towards bringing React Native to many platforms.

The best part of this is how React Native benefits from working happening on each front, an example was how “View Flattening” implemented only for Android at first was later shipped for iOS improving performance there as well.

That’s it for this week. If you want to see more checkout the previous week’s posts here. Subscribe to get notified when new posts are out = )